Several riders from the Ride4Life crew recently completed the Extra Dollop Ride around Victoria. The ride, which was intended to raise awareness of the issues in dairy communities and the resulting possible mental health issues, covered huge areas of Victoria and many dairy communities.

The ride started in Shepparton on the 12th November 2017.  We had had our Annual General Meeting the day before where all the financials of the organisation were presented and the new committee elected.

The first day of the ride travelled through many of the Goulburn Valley dairy areas including Shepparton, Tatura, Stanhope and Kyabram. We then rode on through Echuca before heading east through Barmah and Nathalia. We then rode through Strathmerton and Yarroweyah before stopping for lunch at Cobram. From there we headed through Yarrawonga to Wodonga and then out to Tallangatta for the night. The only mishap was a valve going in the back tyre of one of the bikes, but our intrepid support person Barney got the bike loaded and all was well.  This was fixed in the morning in Wodonga while the rest of the crew headed off.

From Tallangatta is was a beautiful ride up to Mitta Mitta where we stopped to regroup and have coffee.  The next part of the ride involved going "over the top" to Omeo and it's always a good idea to let people do this at their own speed and within their comfort zones.  One by one the riders headed off with the next port of call being Omeo.  The ride is spectacular through the mountains but there isn't that much time to be admiring the scenery.  Concentration on the road and the many blind corners is essential to safe riding.  It was great to see everyone again in Omeo without any problems.  The run down to Bairnsdale from Omeo was magnificent with the bends nowhere near as tight and affording the opportunity to take in the breathtaking scenery in the area.  We stayed in Bairnsdale for the night with a fantastic dinner provided by the local Neighbourhood House. This was after being escorted into town by the police which raised the profile of the ride.  Breakfast next morning was at the holden dealership before setting out again.  Our stay in Bairnsdale was sponsored by Ian McKenzie at The Big Garage. We are grateful for his support and contribution to the cause.

The run through all of Gippsland is always spectacular, but particularly along the South Gippsland Highway. Most of it is valuable dairy country and green all year round.  A stop in Foster for a bit of an early lunch and refuel had us mindful of the time as we had to get to Sorrento to catch the 4pm ferry. We wound our way through well known dairy towns such as Meeniyan, Leongatha, Korrumburra and Loch before heading down the freeway on the Mornington Peninsula to Sorrento. We arrived in good time for a bit of a break before the trip across Port Phillip Bay on the ferry.  It's about 45 minutes and with a calm sea, we were provided a great chance to take in all the views.  Queenscliff was our stop for the night.

Next morning Kerry led the group through her "patch" down to Torquay before heading onto the Great Ocean Road.  It's always great to have a local leading when there are so many back roads and turns.  The photo at the head of this article shows the group ready to tackle the Great Ocean Road.  Whilst it has plenty of bends and twists, at least between Lorne and Apollo Bay, you still have the chance to take in a lot of the fantastic coastal scenery.  The Great Ocean Road is truly a jewel in Victoria's crown.  Rain was threatening however and most of it made it into Warrnambool without getting too wet.

The earlier predictions of only 3mm of rain on the ride evaporated as it poured down overnight in Warrnambool.  We were very fortunate to have been joined at dinner by Brian Schuler who we had met the year before on a dairy ride.  Brian's wife Karinjeet had unfortunately turned her ankle and wasn't able to come along.  It was great to have Brian tell us about the present state of the dairy industry.  We were very humbled when he told us how much it was appreciated that they hadn't been forgotten given the dairy issues seemed to have dropped off the pages of the media.

We all awoke to pouring rain the next morning so it was on with the "wets" and out on the road to Dunkeld via Koroit and Penshurst. Riding in the rain is fine, but the roads in the south west provide their own challenges with pot holes and rough surfaces. A bit of a dry out at Dunkeld with coffee and cake saw the rain drop off a little.  We mounted the bikes and headed off through the magnificent Grampian Ranges.  Always a lovely ride through the winding stretches with the towering mountains on either side.  Our destination from Dunkeld was St Arnaud where we were due to present a Certificate of Appreciation to the St Arnaud Netball Club. They had provided lunch for us on our ride in March raising money for Lifeline.

The group formed up at St Arnaud and headed towards Cohuna where we were staying the night. The rain had finally stopped and the roads dried out. Good riding ahead.

Our next stop was in Dingee, a small dairying area in the Loddon Valley where the local CWA ladies turned on the scones and cream. Seemed the whole town had turned out to say hello and they were very appreciative of us stopping in to see them.  We then headed off to Cohuna where we were to stay the night.  We had the girls from Northern District Health Service organise a BBQ for us at the caravan park and it was all sponsored by them.  The riders were most appreciative, not only of the tucker, but a chance to have a chat to some locals.  Ann Graham, the treasurer for the Loddon Mallee Mental Health Carers Network, did much of the organising of the night. They all got one of our flash new caps as a thankyou and a memento of the visit.

Our last day and a relatively short ride of only 300 ks to Mildura through all the river towns.  A lunch stop in Robinvale and then across the river to the NSW side for the final leg to Mildura.  Our good mate Ray Pratt had organised dinner for us at the Gol Gol pub. This was our celebration dinner on completion of the ride.  This occurred amongst much laughter and chatter. Ray and his wife Alisa (plus Charlie and Jack of course) joined us and also Stephen Hegedus and his wife Leanne. These people are part of a fantastic committee who have raised a heap of money to get a Lifeline office established in Mildura.

Probably one of the most interesting things about distance rides are the relationships formed.  On a ride last year we were joined by Ralph who was befriended by Gypsy. Ralph rides a Piaggio but is an extremely game rider.  He will take that bike anywhere.  Gypsy helped him last year with some riding tips and then Oatsey took over this year when Gypsy wasn't able to come along due to his health.  Our final night saw Ralph being presented with his leather vest at the dinner.  I think it was as much of a moment for all of us as it was for Ralph.  Some bonds are never broken. 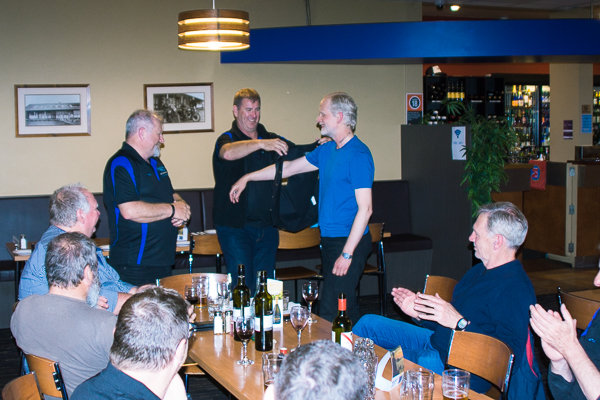 Now it's a matter of waiting for the next opportunity for all of us to get together yet again.  I can't wait!

Click the above image, to make a tax deductible donation to Ride4Life's work. You can contribute to our charity projects or admin costs. It's up to you! Just indicate in the box when donating.  (Check with your own accountant regarding tax deductibility, but Ride4Life is a registered Charity with Deductible Gift Recipient Status from the Australian Tax Office.)

If you need help with a mental health issue now, talk to a friend, a family member or call your Doctor immediately. Alternately, you can contact the numbers below:

If life or property is threatened, call 000 immediately